Juris, or Juritis, Mihels lives in Skujene parish, Amata municipality in Latvia. He spends his days doing farm work in the middle of the forests and recently helping out with the construction of local church.

Juritis was born on 31 August 1961. He was the eldest of the six children in his family. When Juritis was still a young child, his stepfather once injured him so badly that he needed intensive care for months. In his own words, he was forced to study at different boarding schools due to the difficult family situation. From that period, Juritis can proudly present numerous diplomas for various sports events.

Painting came to Juris’ life 25 years ago, when he was baptised as an Orthodox Christian in the name of the Apostle Andrew and settled down in the village near the Orthodox church. Juris mainly paints churches, and occasionally adds his other favourites – boats, horses, and off-road vehicles.

Juris can be happy or get offended like a child. He likes to observe nature, birds, and animals, and listen to fairy tales on the radio every evening. After the fairy tale, there are children’s songs on the radio, and he always sings along. He is delighted when he sees churches, and he dreams of them. When he is painting a new picture, he often says it is the kind of church he had seen in his dream the night before. This way, what he sees in real life and what appears in his dreams combine into unique works of art, in which the variability of similar scenes and the abundance of works is amazing. To make art, he uses all the available materials like, for example, household packaging waste – he paints on the other side of these. In his home his cheerful paintings decorate the walls at the fireplace, the edges of walls, and doors. Juritis says that as soon as he picks up his brush, his headaches and anxiety are gone.

In addition to paints and brushes, Juritis also has a checked notebook, in which he writes poems in pencil or ball-point pen. He says he can also read poems without the notebook – just like that, right away, about anything, anytime and anywhere.

The exhibition is supported by Estonian Cultural Endowment. 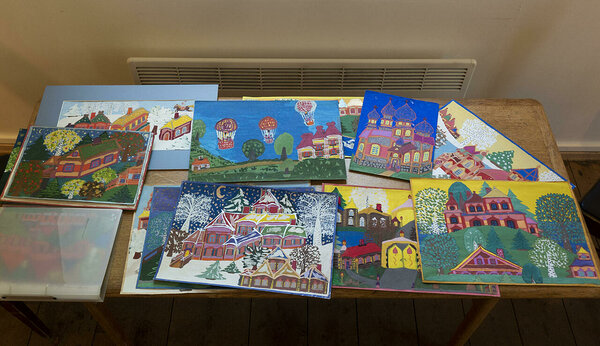