There are families where talent, skills and traditions are handed down from generation to generation. One example is the Härm dynasty, with three generations of talented artists.

The first whose work achieved wider renown and recognition was theatre designer Albert Vahtramäe (1885–1965). He was born in St. Petersburg, where his father was a locksmith and armourer. The young man acquired art education at the School of St. Petersburg Society for the Encouragement of the Arts and later worked in V. Vorobyev’s decoration workshops.

In 1920, the family moved to Estonia, and Albert Vahtramäe started to work in the Estonia theatre as a scenographer and painter of decorations. He created the designs for “Rigoletto” and “Aida” by Verdi, “Hamlet” by Shakespeare, “The Robbers” by Schiller, “The Flying Dutchman” by Wagner, “Eugene Onegin” by Tchaikovsky, “Carmen” by Bizet, and many other productions. There were occasions when the audience started applauding as soon as the curtains opened, as the stage design perfectly conveyed the atmosphere of the play.

Albert Vahtramäe’s daughter Lilian Härm (1927–2021) followed his father’s footsteps and graduated from Tallinn State Applied Art Institute in Scenography in 1950. She did not work as a scenographer, however. For a long time, she worked in the advertising office of the Consumers’ Cooperative, designing candy boxes and labels, advertisements and posters.

Lilian Härm’s life’s work was book illustrations. Generations of children have grown up admiring the brightly coloured pictures in the nearly fifty children’s books she illustrated. She first came to Viljandi during the war and fell in love with this small town. In 1974, she moved to Viljandi with her husband, artist Endel Härm.

Lilian Härm once said that she was attracted by the smallness and peacefulness of Viljandi and the intimate closed landscape here. Her favourite season was autumn, which is well reflected in the colouring of her paintings. Her works include more than 3,000 paintings: landscapes, city views and still lifes. There are also many decorative pastels of cats. The highlights in the artist’s later work are female nudes.

Lilian Härm was also talented in the use of words. Her collection of haikus "Naeratus varjude varjus” (A smile in the shade of the shadows) was published in 2019 when the author was 92 years old. She also illustrated the collection, creating the first abstract watercolours in her life.

Lilian Härm’s husband Endel Härm (1923–1996) was born into a family of well-known cultural figures in Viljandi. Endel’s father Oskar Härm was the business manager of the Ugala theatre; his father’s brother August Härm was an orchestra musician and cellist, and his mother's brother Voldemar Metsamärt was a translator and poet.

In 1947, Endel Härm enrolled in Tallinn State Applied Art Institute, from which he graduated as a scenographer. He also gave up the profession he had studied and worked for many years as a graphic designer with his wife. Besides designing advertising posters and product packaging, he illustrated some children's books and painted landscapes. As an artist, Endel Härm gained success for his true-to-life paintings. His landscapes have particular tenderness in them, thanks to his fine brushwork. The hidden eroticism and surrealism of his nudes are reminiscent of Eduard Viiralt's works. The nature details in his book illustrations are very realistic, as if graphically perfected, resembling the works of Björn Landström, the Finnish illustrator of "Kalevala".

Endel and Lilian Härm’s son Hanno Härm (1952–2021) revealed his talent for music and art at an early age. He played the solo guitar in various groups. As an artist, he was self-taught, although he received guidance from his parents when needed. Lilian Härm repeatedly pointed out that Hanno was the most talented artist in their family.

At the end of the 1970s, Hanno Härm had a solo exhibition in the lobby of the Rubiin cinema in Viljandi. In spring 1981, he displayed his series of works depicting melting candles and oranges at an improvised exhibition in the Castle Hills. Together with Hanno, also Ants Gross exhibited his unique therapeutic works there.

Hanno Härm painted semi-abstract urban landscapes and pictures of railroads, which were the result of complex calculations.

In the 1980s, as a member of Viljandi art circles, he participated in the legendary youth art exhibitions in Tartu and the art festival Kiriküüt. For a short period, he worked as a painter in the small town of Härnösand, Sweden. After retirement, he lived and worked in his country house at Tänassilma.

Their elder son Härmo Härm (born 1949) is an engineer and musician. He graduated from Tallinn Polytechnical Institute in automation and telemechanics. At the institute, he was involved in developing vector voltmeters and other electronic measuring instruments.

He also designed tone blocks and wah-wah pedals for school bands. Sound effects were trendy, and local bands followed the example of Western performers. In the early 1970s, Härmo Härm also played in ensembles. Using electronics magazines from the USA, he built the first oscillator-based synthesizer in Estonia. Later he made an even more perfect synthesizer. In the 1970s–1980s, in joint projects with composer Sven Grünberg and designer Kaarel Kurismaa, Härmo Härm took care of the objects' sound, light and oscillation effects. 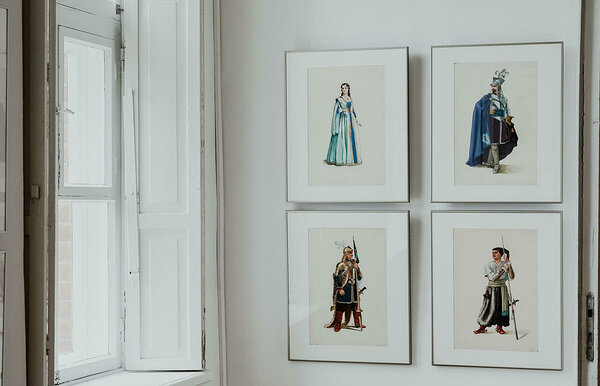 This exhibition explores the layers of repair and our relationship with clothing and textiles. Aiming to rethink fashion and to create a caring environment through the act of repair, co-creation and craftivism. Every wear and repair can be seen as embodiment of a story from a journey together.

Even a small act sewing a button gives us humans the possibility for interference to global processes. A small stitch can be a revolutionary step towards longer lasting and meaningful relationships with fashion.

The designers and artists invite the public to participate in workshops and to contribute to the exhibition by adding their work of repair. The exhibition will be formulated through co-design with the audience.

The exhibition space facilitates a workshop where one can repair, learn how to mend and to discuss the wellbeing of our planet, ourselves and our clothing while making together. The audience is invited to a discussion over our roles in our relationship with textiles and clothing - are we the consumers, owners, wearers or are we in a caring relationship?